Topinambour – cultivation in a polytunnel 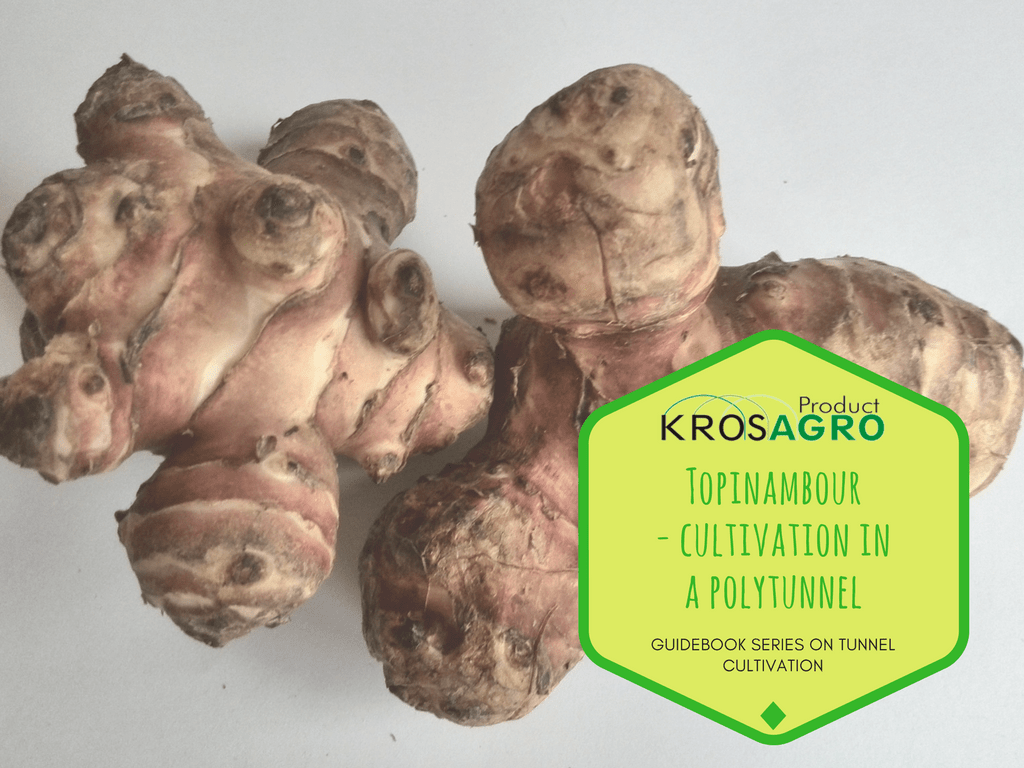 Topinambour is also referred to as Jerusalem artichokes. In gardens, it is planted both as a decorative and edible plant. The bright yellow flowers look exceptionally attractive on display, and the underground part of Jerusalem artichoke makes tasty tubers. One plant is able to produce up to 70 of them! Topinambour has many valuable nutritional and healing properties. It is recommended for diabetics and people with high blood sugar, acting as a natural regulator thanks to the inulin contained in the roots.

Jerusalem artichoke, although it comes from South America, grows perfectly under European conditions. This plant is not demanding when it comes to cultivation, and furthermore is able to survive temperature up to -16º.

In this part of the guide on crops under cover, we will explain how to grow topinambour in a polytunnel.

What is Jerusalem artichoke?

The plant has been cultivated by Indians in North America for a long time. With time, it made its way to Europe. In Poland, it appeared in 1730, becoming part of the Silesian cuisine. The French call it perennial sun, while the English named it Jerusalem artichoke. Topinambour consists of a high stem reaching up to 3.5 m and green leaves. The lower leaves have a heart shape, but those located closer to the top of the plant, get a more ovoid shape. Bright yellow flowers strongly resemble the well-known sunflower , even though they are much smaller.

What requirements does Jerusalem artichoke have?

Although the plant is very easy to grow. It needs a sunny site and warm soil in order to optimally mature. Soil in the first months of spring is too cold for any planting. Frost appearing during day and night negatively affects the plants. To reduce the effect of those harmful factors, a polytunnel is set over the crop. Inside, thanks to the foil, a favorable microclimate is maintained. Earth and air are heated up for longer, and this stimulates plants in terms of emergence and development of seedlings. With a foil tunnel, the gardener greatly extends the growing time.

The more fertile the substrate, the more mature the yield. Although on clay soil, Jerusalem artichoke gives fewer tubers. It cope much better on less fertile ground than, for example, potatoes. The plant prefers moderately compact and moist soil. Broad soil tolerance is the result of an extensive root system.

Topinambour can be grown for a maximum of 3 years in the same place. After which the soil needs to be enriched with the missing ingredients. It is a very invasive plant, so you have to remember to remove all underground parts when you stop growing it. Topinambour is able to grow from the smallest root, so keep an eye on it.

Growing from seeds takes too long, and in the first growing season, there is no harvest . Difficulties with developing the plant from the seeds can be overcome with a professional polytunnel equipped with heating, ventilation and irrigation systems. However, those who own hobby garden tunnels avail of a different method.

Jerusalem artichoke is planted from tubers. To guarantee a good yield, about 15 tubers are needed for about one square meter . In November or December, the tubers are placed at a depth of 15 cm, or just 10 cm if we intend to plant in spring. The autumn option is much more beneficial as there is an additional 60 days of growth. You do not have to worry about the plant. Not only it is frost resistant, but it will also be protected from cold and frost inside the greenhouse.

Interestingly, even at 4ºC, the plant is able to germinate and root. Planting once can be enough for up to 20 years, thanks to its self-renewing ability.

When planting Jerusalem artichoke in rows, you need to keep an interval of 0.7 to 1m, and 60 cm between plants. However, if you are fans of Jerusalem artichokes and have access to a large polytunnel, it is worth keeping a distance of 1.5 m between the rows.

At the very beginning of the ripening season. When the plant is just emerging, it is necessary to systematically remove any weeds that could harm the main crop. A garden tunnel significantly limits their spreading. Because most seeds that are carried by the wind have no way to mix with our crops thanks to the foil.

As the plant is climbing high, it is necessary to make sure that the cover remains undamaged. For this, we can cut the main stem at 1.5 m . In order to obtain a more abundant crop, you can remove the flowers. Which makes the plant focus on growing the underground part.
Harvest of Jerusalem artichoke

Tubers can be harvested in autumn until the first frosts. It is much better to collect them after the frost, because the plant then develops a more intense flavor. Unfortunately, despite robustness during cultivation, it is poorly suited to storage after harvesting. Which is why it is much better to pick it directly from the ground. That way, you will be able to enjoy fresh crops even during the winter. If the foil adequately protects from the cold. The soil will be so soft enough to extract the tuber from the ground without any problem.

However, if you want to develop a stand in the greenhouse for another plant. Tubers should be stored well covered with sand and peat. Ensure that the mound is not exposed to wind, which makes the topinambour drier.

Use and preparation of Jerusalem artichoke

Topinambour is grown as animal feed, a fungus substrate is prepared for it, and thanks to its high energy properties, it represents a good biomass ingredient.

Topinambour was and is still used for the rehabilitation of degraded lands in which ecological disaster occurred. The roots take all the constituents from the soil, storing them in tubers.  After which, heavy metals, organic compounds, oil-derived material, and even radioactive elements can be removed together with the biomass of the plant.

Jerusalem artichoke is highly valued in the kitchen, tubers can create a lot of nutritious dishes that have many health properties. It is a much tastier and healthier alternative to potato. Tubers can be eaten raw, fried, baked, cooked, steamed, as part of salads and used as a substitute for lemon in tea.

Ecological, tasty, nutritious and healthy, quickly yielding, resistant to frost, and also very versatile. This is topinambour, worthy of a growing space in a garden tunnel.

How To Start Growing Plants In A Greenhouse

Are you wondering how to start growing plants in a greenhouse? Well, you're in luck! ...
Read more →

Are you wondering how to start an organic farm and greenhouse business? To start an ...
Read more →

How To Grow Tomatoes In A Greenhouse

If you want a sweeter, healthier, and juicer tomatoes, you have to know how to ...
Read more →
We use cookies on our website to provide you with the most relevant experience by remembering your preferences and repeat visits. By clicking "Accept", you agree to the use of ALL cookies.
Privacy settingsI accept
.
Manage consent