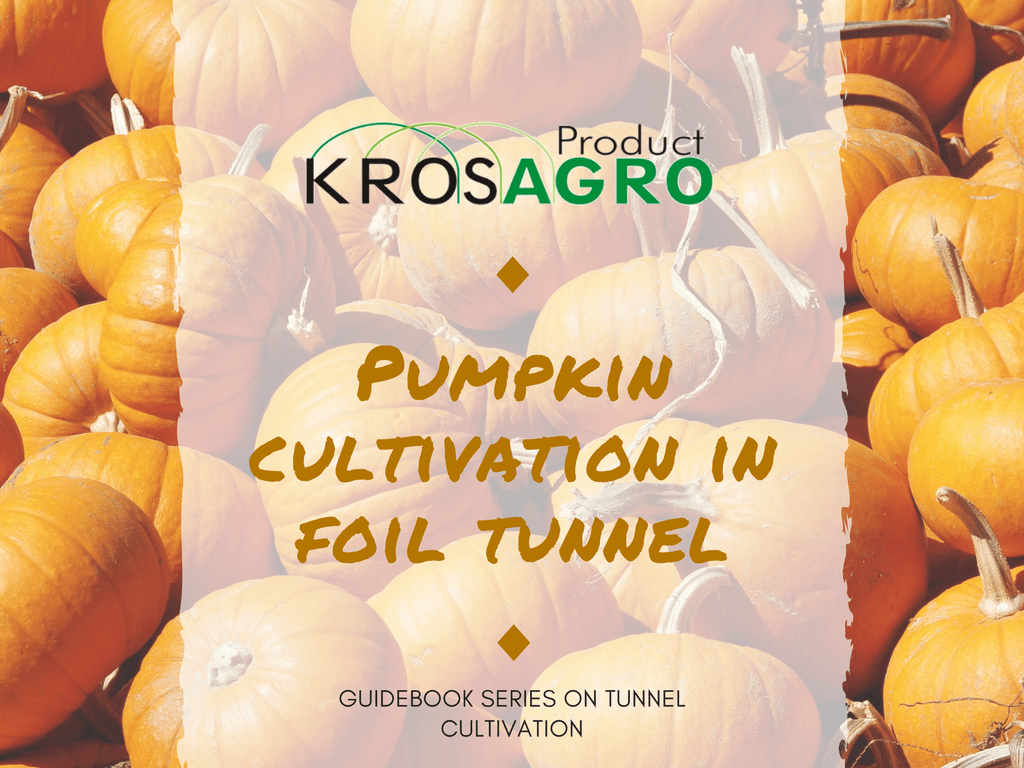 Pumpkin is a very recognizable vegetable, emptied and used as a decoration during Halloween. Pumpkin cultivation in Poland is not as popular as in western countries, as squash or courgettes are more often chosen here. Compared to the giant pumpkin mentioned above, it has much more nutritional value and can be stored for several months and still remain edible. The cultivation of this plant is extremely easy, as it can be sown on almost any type of soil. As a thermophilic and lush growing plant, it needs to grow in the sunny season and be protected from low temperatures. The cultivation of pumpkins in foil tunnels will guarantee proper conditions for development, resulting in a substantial vegetable, tasty pulp and nutritious seeds.

Giant pumpkin has large amounts of a and b carotene , vitamins C, B1, B2, PP and lots of mineral salts – phosphorus, potassium, iron, calcium and magnesium. The orange pulp that contains the most carotene is valued. This ingredient is an antioxidant, supporting the body in the fight against cancer and cardiovascular disease. It also soothes and regenerates the digestive system and liver. It is one of the most beneficial nutritional supplements for children, and any of those available products always contains pumpkin in it.

Pumpkin is a plant which grows up to 12 m in length. It has large leaves with hairy edges, and the roots are attached to the soil, spreading underground. Yellow odorless flowers appear from June to September. Females are growing singly, male in bunches on the sides of the leaves. Fruits are generally very large, with a spherical, cylindrical shape. Everything depends on the variety, as they can equally be flatter. The outer part of the fruit is covered with an orange thick crust and the pulp has a fibrous consistency. Inside, there are numerous white seeds.

Among the varieties, it is worth distinguishing the seedless pumpkin . Its seeds do not have a shell, so it is edible or even processed without much trimming. On the other hand, the pumpkin flesh breaks down into small, oblong pieces like spaghetti. In addition to edible varieties, there are also decorating pumpkins. They are used as an ornamental element of a home or garden. Their fruits are not edible, but they are ideal for decorating tables or shop windows. Their climbers can be used to create an interesting green wall that will cover part of the garden.

Pumpkin is a thermophilic plant, with low tolerance for cold, while frost damages the plant. The optimal temperature for growth is 25 ° C, while the minimum temperature is 8 ° C. The soil should be fertile and permeable, fast-heating, neutral.

When cultivating a pumpkin in a garden greenhouse, two seeds are planted in a 60 x 60 spacing for small varieties, and 100 x 120 for the giant pumpkin that needs a lot of space. Plants are arranged alternately or in chess form. Seeds germinate after up to 8 days, during which care should be taken to maintain a constant temperature of 12 ° C in the greenhouse.

Throughout the entire growth, water should be provided constantly, as any deficiency would make the fruit smaller. This is because the plant has a shallow root system and large, wide leaves. Under favorable conditions, flowering starts 60 days after sowing.  Leave up to 4 fruit buds and remove side shoots when they reach 50 cm.

Seedlings are prepared in a horticultural tunnel : fill pots with 2/3 of soil, and plant two seeds. This method can be implemented in April. After emerging, stems are weak but they quickly grow out of the container, covering the ground. The plant is transplanted into the greenhouse in the first half of May. Benefiting from much better conditions compared to outdoor cultivation. Under cover , crops are protected from the drying wind and deadly frosts.

The pumpkin is not sensitive to fore crops, it can be grown following cultivation of any plants except pumpkin itself. This vegetable leaves a weed-free and well-structured area, which provides a good base for the next crop. Large spacing allows simultaneous cultivation with cauliflower, cabbage, onion and many others.

Pumpkins are characterized by long, creeping shoots that extend even several meters, intensively branching. Two of the most popular methods for shoots are to allow them to develop on the ground or run on pergolas. In case of trellis support, fruit should be tied.

Multiplying shoots should be trimmed and as it is a strong climbing plant. It is able to occupy a few square meters in the polytunnel. In plastic tunnels, make sure that the pumpkins do not take up too much space. Long shoots don’t necessary lead to large fruit.

The first cut should be made in the second half of June or the beginning of July. Stems are cut after the 6th leaf. The next one is done in August after the appearance of fruit. Under which straw is laid (to better shape and colour the pumpkin). We then cut the stem 3 leaves behind the fruit.

Trimming should be carried out on sunny days during ventilation of the foil tunnel. This reduces the chance of developing fungal diseases. These cuts do not need to be protected in any way,. Provided they are performed evenly and neatly with the aid of a sharp pruning shear.

Fruits that will be stored should be left as long as possible on plants, but harvest should be carried out before the first frost. Pumpkins should be prepared before storage, therefore it is laid to rest for about two weeks in a sunny spot. This allows the skin to harden. The storage area should be dry and warm and the temperature should not fall below 10 ° C.

Garage and storage tents are becoming the obvious choice as constructions for the storage of machines, vehicles and equipment. Modular…

How To Cool A Greenhouse Without Electricity

There are some best ways on how to cool a greenhouse without electricity; like maintaining adequate ventilation, periodically wetting your…

Cultivation of okra in a polytunnel

A polytunnel allows you to grow plants that would not usually grow in the garden. Thanks to the cover, uncommon…