Growing tomatoes in a polytunnel 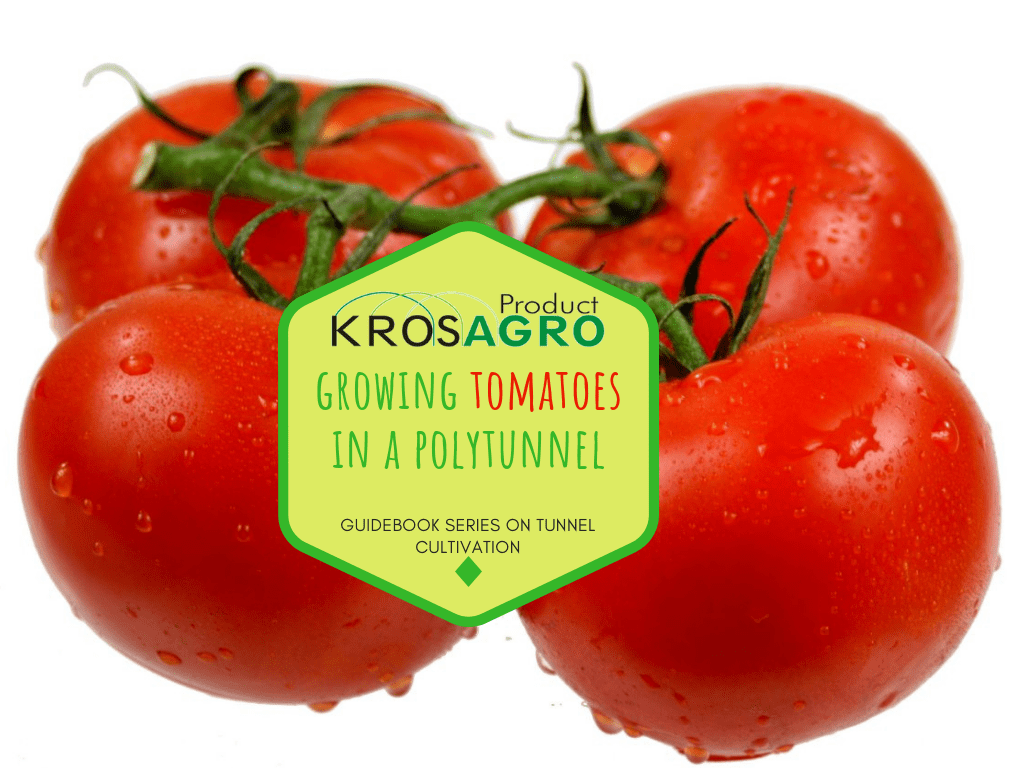 These are the most popular plants grown under cover. The delicate and juicy fruits are susceptible to any damage, which is why they are covered by a foil , thus protecting them against hail and heavy rain or snowfall. The stems and roots can get ripped out or broken under the influence of strong wind , which is why cultivating tomatoes in a greenhouse guarantee a safer production. Tomato is a thermophilic plant, so using a garden tent for its cultivation positively influences its development. For proper growth constant warm soil and air are required, making a foil tunnel the ideal tool.

In this next Krosagro guide, we will review how to plant and cultivate tomatoes step by step in a polytunnel or greenhouse.

Due to the popularity of this plant, the market provides a large selection of seeds and seedlings. When cultivating, it is worth considering what we really expect from our crops in terms of look, taste, size and even smell of our tomatoes. The palette of variants is surprising, however, in terms of cultivation, the differences are minimal.

Cultivation in a garden tunnel

Regarding garden cultivation, tomato fruits have different sizes: from 20 mm to much larger varieties up to 20 cm. The same can be said about shapes. Spherical, oblong, similar in appearance to squash, zucchini, peppers and even pears. Most of them are red, but we can find orange, yellow, green, purple, and even black species.
Of course, some of them are more or less adapted to growth under cover, so before buying, you should check if it is the right type for tunnel. The best choice will be those with a higher resistance to cracking.

The most favorable temperature for its development is between 22ºC and 27ºC during the day, and from 16 to 27ºC at night. Although tomatoes grow and flower much better with heat, temperatures above 30º will contribute to harm them.

From seedling preparation stage, you should make sure about the right amount of sunlight. Even and intense access to it means the stems will develop properly. Otherwise, when the seedlings get too little, the plant grows weak and crooked. Consequent care will be difficult in this case.

This is a very confusing subject, because humidity plays a key role in tomato growing. From the initial stage of growth to fruiting, large fluctuations in humidity can contribute to fruit cracking. A high humidity rate lasting too long is a factor for many diseases. Cracked plants are also problematic at fruiting stage. In such conditions, it is much harder for the flowers to get pollinated.
Tomatoes are to be watered less frequently, bur more abundantly. Frequent and light watering in the long term leads to root damage. Remember not to soak leaves or flowers, and plant with just roots in the ground, leaving stems in the open.

Although we emphasize this in almost every guide, it’s worth doing it again. It is important to know which soil is available to you in order to plan the fertilizer doses and any feeding in a precise way. Soil pH for tomatoes should be between 5.5 and 6.5. Many gardeners practice mulching with straw or agro textile to improve condition of the soil. As a result, the substrate maintains its moisture for a longer time, with a best rate between 70 and 85%.

The seedling preparation stage itself lasts from 5 to 6 weeks. They are permanently sown in April, earlier if you have a heated foil tunnel. The seeds are sown in rows, covered with a 0.5 cm layer of soil, in the middle of March. It is very important to avail of a soil free from pathogens and pests.
Tomatoes need a germination temperature that remains between 25ºC and 27ºC, and 20ºC after they have emerged. At night, the optimal temperature should be around 16 ºC. After 14 days, a true leaf develops, then they are transplanted into containers in such a way that the distance between cotyledon and ground is 1 cm. After the next 14 days, as seedlings have formed 3 leaves, they are planted in pots.

Seedlings, having reached 7 – 8 leaves, are ready for hardening. The treatment itself is intended to make the plant less susceptible to changes and bad weather conditions. First, we place the seedling outside for 3 hours to ventilate. The same process is repeated for a maximum of 4 days. It should be remembered that a temperature close to -3ºC destroys the seedling.

Both in professional and domestic production, tomatoes are supported by strings suspended to the structure. Therefore, if we chose a variety with large fruits, remember to carefully proceed in a polytunnel. Even with a small load, structures of such tunnels can bend or break under the weight of crops.

Tomato should not grow in the company of potatoes, the plague that attacks them can move on to tomatoes. Carrots, beets, corn and peas are also not recommended while paprika, spinach, kohlrabi, beans and cucumber can be considered good neighbours.

Tomatoes are self-pollinating, and for this to happen, it’s worth taking care of the whole process. The simplest but flawed way is to shake the plant in such a way that the pollen falls on other inflorescences. We can also use a brush. After we collect the pollen on the end of the bristles, we can transfer it to the remaining flowers. But this is time consuming. If you have a tunnel with side ventilation, opening the curtains and let air circulate will do the job. In large facilities, beehives are placed in several spots and serve as pollinators. The insect container itself is not the most expensive, but for the crops to survive, it is necessary to create the right conditions.

During ripening, the shrub releases shoots that are completely unnecessary for the cultivator. They do not produce fruit or present any advantage. In order to relieve the tomato, you can cut that shoot. Take a similar action if we notice any disease changes, this is a way to slow down the spread of pathogens.
If the unnecessary shoot is removed, the plant sends more nutrients to the ones we want to cultivate. So it does not lose energy unnecessarily and uses it optimally. Removing buds and peeling flowers accelerates fruiting and increases the chances of growing large and abundant fruits.

Leave from 3 to 7 grapes of fruit that the flowers generated. In the case of small-fruit varieties, you can double this number. Others can be removed manually when they are still small, or using tools. In the latter case, when work is done, you need to sterilize the shears.

Packages with seeds often contain information about sowing period in March in a cold frame. This date usually tends to…

Growing spring vegetables in a polytunnel

Many people wait for spring to eat fresh vegetables again. In stores, though, spring vegetables are beginning to appear. However,…

What to grow and what not in a polytunnel?

What to grow and what not in a polytunnel? One might think that, thanks to optimal conditions created inside the…