Cultivation of okra in a polytunnel 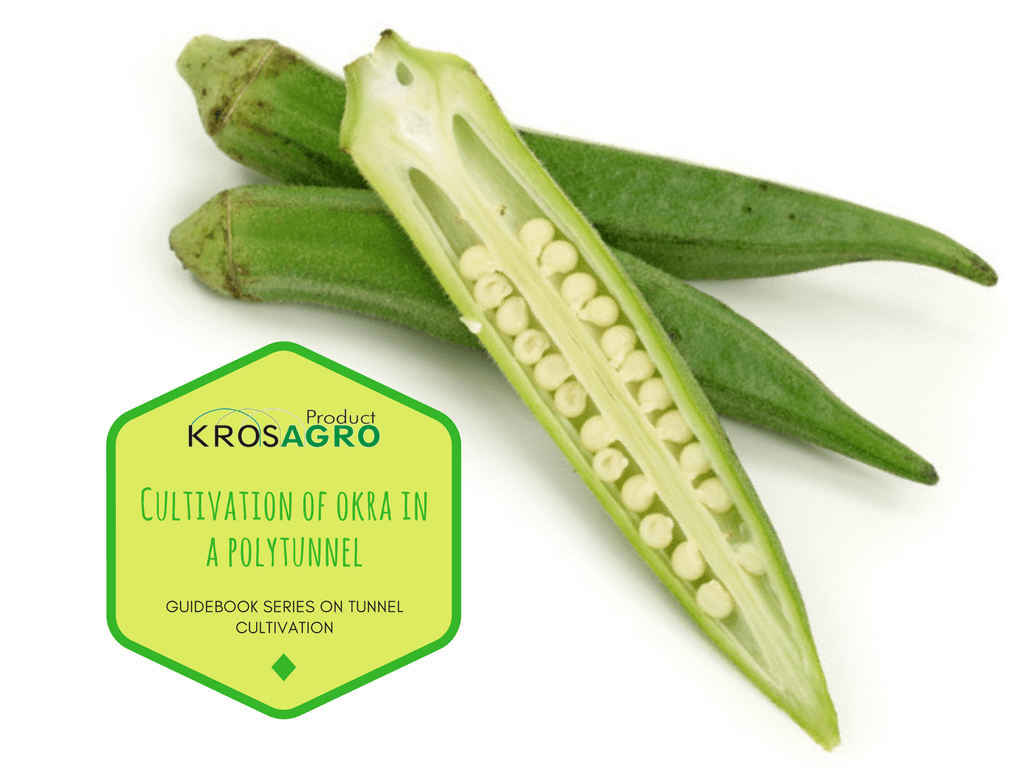 A polytunnel allows you to grow plants that would not usually grow in the garden. Thanks to the cover, uncommon and little-known oriental vegetables can mature in a greenhouse. Fans of Asian cuisine, vegetarians and gardeners who like to experiment should plant okra.

The edible okra is a tasty and interesting looking vegetable, giving us nutritious and healthy crop with little care. The taste is reminiscent of aubergine with a hint of bean. In the kitchen, it is also used as a natural thickener.

In this chapter of the Krosagro series “What to grow in a polytunnel?“,  we will advise you on how to cultivate and plant the okra in a garden tunnel step by step.

This vegetable is popular in Africa, in western Europe but especially in Asia. Where it has become an essential part of traditional cooking. It is grown where hot climate is found. In spite of this, it can be produced in a foil greenhouse, which provides enough light and heat.

Okra looks very attractive during early growth. Large leaves grow from the main stem, turning yellow  in summer and becoming subject of admiration. Large petals begin to develop from a white tinge. Which over time darkens, taking on a bright red color, sometimes covered with black dots. The edible part of the okra is an oblong vegetable, with a cross section.
A lot of people associate it with Syrian ketmia, which is known as hibiscus, which does not develop fruit, but rather has aesthetic values.

The plant probably comes from Africa, which means it has high demands concerning heat. Growing it in the ground without cover means a great risk that it will not mature. That is why looking after it under cover is a much better solution. Thanks to the plastic foil, a polytunnel or greenhouse will heat up air and soil for longer, providing good conditions for the growth of okra.

A sunny, warm and wind-protected spot will be perfect for its cultivation. It is even better if the okra is constantly exposed to the sun from sunrise to sunset.

The optimal substrate will be permeable, heat up quickly and have a pH between 6.0 and 6.5.

The edible okra is planted in a tunnel at the end of February or in March. The temperature should remain at 16 ° C under cover for correct growth. If the gardener has an unheated polytunnel, it is worth waiting until the inside heats up and maintains the required 16 ° C.

The plant does not tolerate transplanting, but we can prepare seedlings by planting in a pot. It must be big enough to accommodate the developing okra. The best temperature for it to emerge is 20 ° C. Before planting the seeds, immerse in water, soak them for 24 hours. Such treatment significantly accelerates germination. When frosts have disappeared and positive temperatures occur inside the tent, seedlings can be placed permanently.

It is not rare for the plant to reach even 3 meters with favorable conditions, so to avoid damage or bother with other plants, it should be shortened or managed like cucumbers. When using this method, use a stick close to the plants and tie a string between them. Set up poles and plants every 60 cm. Such a support means okra is less likely to break its stem.

Almost all varieties release vegetables after two months. Their systematic collection encourages the plant to release more. This goes on until September or October, until the temperature drops below 10 ° C. Keeping the crop for too long on the plant inhibits the formation of the next, so you should collect them as soon as they are mature.

Before we start collecting, it’s worth putting on gloves. Hair on the vegetable can irritate a delicate skin, and a loss of properties can occur at cooking stage or when preparing dishes.

You can also prepare tea with okra flowers which contain a large amount of vitamin C. It is an ideal infusion for autumn evenings, helping to overcome the winter blues when struggling with colds. Systematical intake strengthens the body and protects it against bacteria.

Dried flakes are also used as a spice giving dishes a peppery flavor. We mentioned flowers in the kitchen in the chapter “Cultivation of edible flowers in a polytunnel” and encourage interested readers to learn more about this topic.

The okra, in addition to a high quantity of vitamin C, has a high content of pectin. This reduces cholesterol, protects against ulcers and other painful diseases of the digestive system. Due to its large content in folic acids, it is often chosen as part of the diet for pregnant women or those trying for a child. Lutein and carotenoids not only improve eyesight, but also limit the risk of macular degeneration and cataracts.

Is it worth cultivating okra?

Although the crop itself is not the easiest, having a polytunnel gives an opportunity to cultivate plants that would not normally grow in the garden. In addition, okra is usually only available in cans or marinated, and it is difficult to get it fresh in stores. So try to develop it from seeds and test your gardening skills.

A garage tent for a camper van is one of the purchase that every caravanning ...
Read more →

Garden under cover before winter

A garden under cover before winter could still be developed. The interruption will not last ...
Read more →

How To Cool A Greenhouse Without Electricity

There are some best ways on how to cool a greenhouse without electricity; like maintaining ...
Read more →
We use cookies on our website to provide you with the most relevant experience by remembering your preferences and repeat visits. By clicking "Accept", you agree to the use of ALL cookies.
Privacy settingsI accept
.
Manage consent