Growing Chicory In A Polytunnel 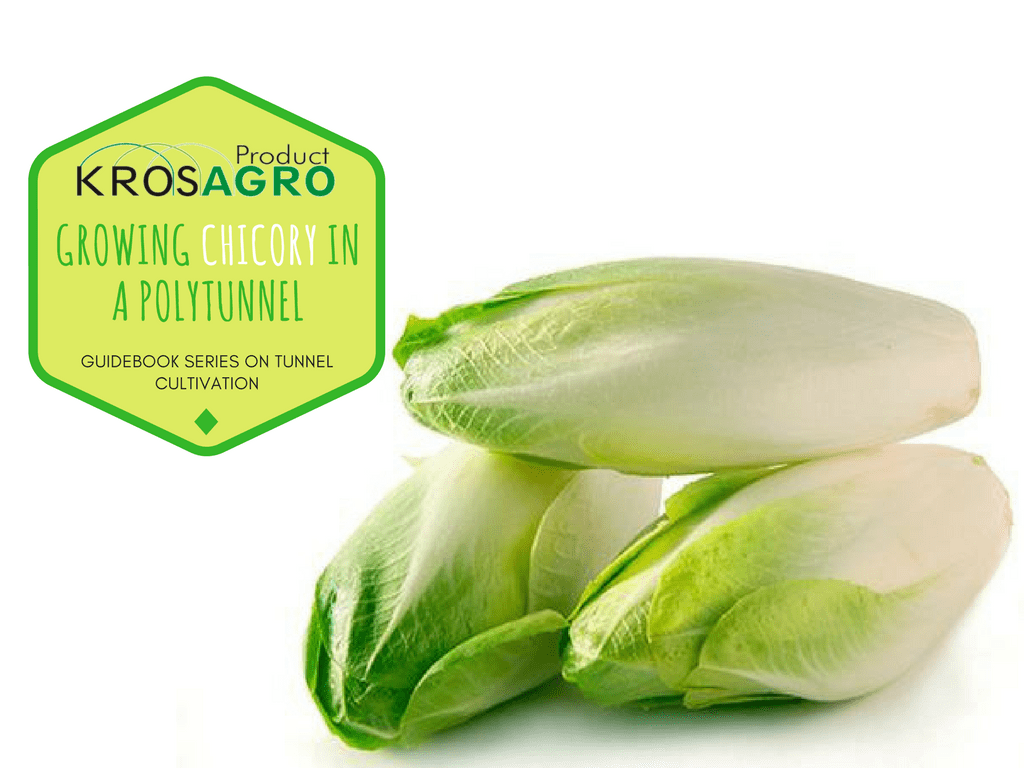 Chicory is a leafy vegetable very similar to lettuce, with rather more nutrients. One of the advantages of chicory is its resistance to cold. It can be eaten during winter, by growing it in a polytunnel. In this next part of the Krosagro guide, “what to grow in a polytunnel”. We will tell you how to plant and start growing chicory in a polytunnel.

Chicory can be found in several variants, but two of them are most often found in gardens and plots. Curly endive in summer, characterized by green leaves, and leaf chicory in the autumn and grown in the ground with bleached, tight heads. The italian one, called radicchio, is characterized by red leaves. With white nerves that are folded to form a compact head.

During the first year of growth, they produce a rosette of leaves and a root up to 30 cm in length. The second year, a flower shoot is formed, which develops for about 60 days, and then fructifies. The resulting achenes contain seed, with 1 g containing up to 800 seeds.

Growing chicory in a polytunnel

The plant has small requirements and tolerates low temperatures quite well. Although frost does not harm it, a persistent temperature of -10 ° C can damage the crop. That is why it is good to protect it by using in a polytunnel. And thanks to the additional cover from a mini foil tunnel placed inside a standard greenhouse, chicory can be grown all year round.

The optimum temperature for growth oscillates between 15 ° C and 20 ° C. If it gets higher, ventilate the greenhouse. With single hobby tunnels, opening the door on one side of the tunnel is sufficient. While hobby multi tunnels with side ventilation let you raise the curtains for better air circulation inside.

The best substrate will be humus, neutral fertile soil, with pH between 6.0 and 7.0. Chicory develops badly on light and heavy soils, but in case of poor soil quality. It can be mixed with compost and clay.

Although the soil should be fertile, it should not be provided with fertilizer just before sowing.

Chicory seeds are sown into the ground in foil tunnels or in ridges in the case of large production. The second method is suited to seasonal foil tunnels. Chicory itself is then used as a fore-crop or an after-crop.

In field cultivation, sowing starts from mid-May until mid-June, while under cover. It can be implemented at the beginning of March. A distance of 30 to 45 cm is maintained between the rows. Seeds are placed at a depth of 1.5 cm, every 10 cm.

Properly planned rotation and associated cultivation. Foil tunnel is a guarantee of high abundant yield. Chicory is an example of a plant that tolerates mono-culture. It should not be grown on sites where onions. Especially asteraceae plants were produced during the previous season. However, good fore-crops are : cabbage, cauliflower, beans, peas and potatoes.


Although the plant is doing well without fertilizers, feeding it will pay off in terms of yield. High water requirements means systematic irrigation. Especially when developing a rosette, or in case of drought. With its delicate leaves, it is sensitive to the presence of competing plants that can overgrow it. Although the weed are usually less of a nuisance in a polytunnel. It is worth removing them systematically .

When fertilizing, care must be taken. Chicory is susceptible to the accumulation of nitrates. So make sure you don’t exceed amounts in the soil when spreading multi-nutrient fertilizer . The use of mono-component fertilizers is much more suited and precise. Proper irrigation and fertilization in the greenhouse has a significant impact. On the chemical soil composition and therefore on the root quality. Gardeners growing plants with ecological methods can replace natural fertilizers with natural ones (bio humus).

Roots are harvested 5 or 6 months after the sowing date, usually in late autumn. Around the second half of October or beginning of November. It is very important to carry out the harvest. When the plant has developed strongly colored leaves and most importantly, before the return of frost. Roots are excavated from beds or ridges using wide forks. During the entire process, be careful not to damage or break the plant. Otherwise, it will rot and unfortunately will not be suitable for the next step. Optimal roots are those that have reached. A diameter between 3 and 6 cm for a length of 16 to 20 cm.

Following the harvest, chicory leaves are ready for forcing . For this purpose, they are cut at the root, at least 2 cm. If lateral growths diverge from the main root, they must be removed.

Forcing itself can be carried out in winter. Pots or garden boxes filled with compost soil are used for this purpose. The roots are inserted vertically so that the small part of the leaf protrudes above the ground. It is very important that development takes place in a dark room, without any light.

A mini foil tunnel can be covered with light-impermeable material. This is important because the plant needs a positive temperature for the further growing process. The temperature must be kept between 10 ° C and 20 ° C during the forcing period. By combining structures such as a greenhouse and its smaller counterpart. Good conditions can be created even during cold winters.

After about a month, the emerging heads should be ready for consumption. They can be cut directly from the ground.

You will have access to fresh leaves throughout the year and a perfect complement to the diet. Growing chicory in a polytunnel, has low requirements, is very tasty and healthy. So let’s find a spot for it in the greenhouse.

A garage tent for motorcycle is a smart replacement for heavy and inflexible brick buildings. ...
Read more →

How to speed up harvest when cultivating under cover?

Mobile tents in the event industry

Mobile tents in the event industry are the best solution to protect participants from the ...
Read more →
We use cookies on our website to provide you with the most relevant experience by remembering your preferences and repeat visits. By clicking "Accept", you agree to the use of ALL cookies.
Privacy settingsI accept
.
Manage consent