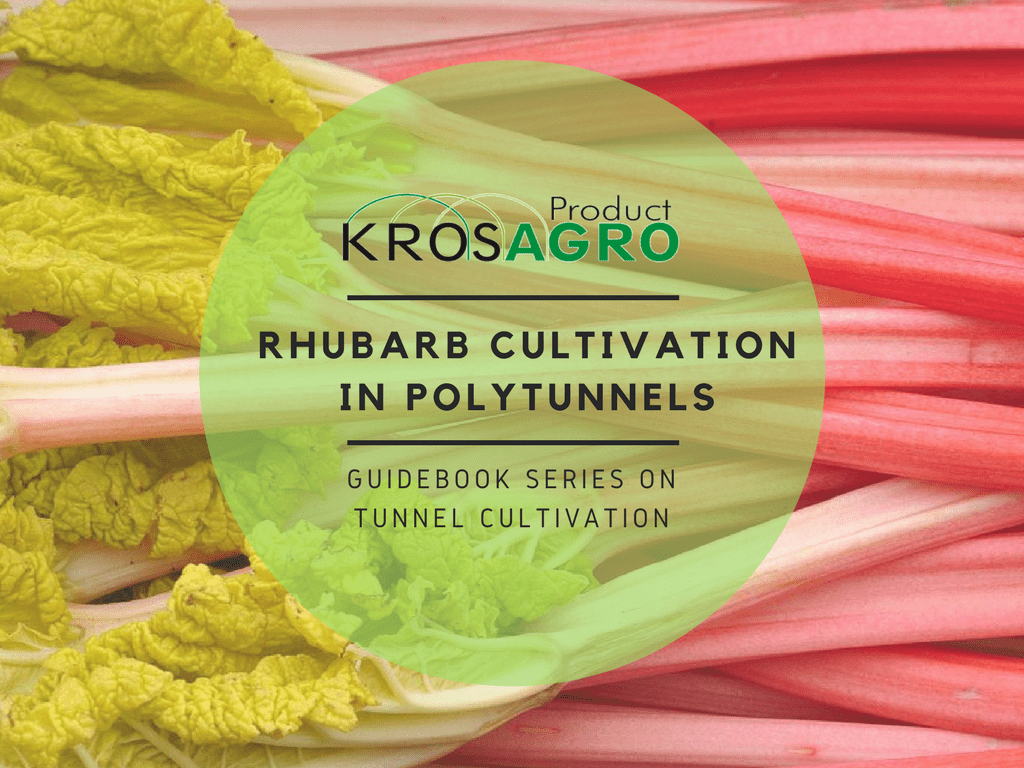 Rhubarb is a perennial plant which, with proper care, is able to grow for even 15 years! The most tasty parts of this plant are mature and young petioles, ranging from 3 to 5 weeks old. This vegetable is wintering in the ground and this makes it one of the first crops that can be harvested in  spring. High resistance to frost contributes to ideal growing conditions in Polish climatic conditions. Polytunnels , which create a favorable microclimate, significantly speed up rhubarb growth.

Stems growing up to 1.5 m in length are characterized by a red tinge and acid taste. They are used for preserves and jams preparations. Rhubarb is a delicious addition to tarts, but compote is more often  made from it, which perfectly quenches thirst. Moreover, processing this vegetable can result in a light wine with sour taste.

How to grow rhubarb

Rhubarb should be well exposed to sunlight, because the plant grows better and produces more yield with such conditions. At every stage of growth, it is important that the plant does not feel dehydrated. Especially when leaf buds appear and develop. All deficiencies will have an effect on the state of the plant, its yield and conditions of growth the following years. On the other hand, leaving the plant in stagnating water leads to deep rot.

Unopened buds can even withstand temperatures close to -10 ° C. This characteristic sums up rhubarb’s resistance to frost. Rhubarb, like kale, is a plant that continually grows , even in December, January and February as long as snow does not cover the ground.

If you want to focus on growing rhubarb. You should plant it in fertile and weed less soil, rich in nutrients. The plant prefers a moist substrate with a pH between 5.8 and 7.0. However, if the vegetable itself is grown as a main crop, it can be planted in a less rich but still well-exposed area. In the first example, the plant will quickly and fully ripen and in the second. It will require much more time. A similar situation occurs when it is planted in a shaded area. Full potential is only obtained when exposure is sufficient.

If soil ph is below 5.8, lime (2t / h) should be added before planting in the garden tunnel. Importantly, the plant produces large amounts of oxalic acid. Which is harmful to the human body  and even lethal in very high concentration. Ripe rhubarb contains much less of it, however, you still have to carefully cut the vegetable and thoroughly wash it.
As rhubarb is a perennial and the cultivation time in the tunnel is relatively long. You should carefully select and properly prepare the spot.

Rhubarb is best planted in early spring or autumn, it is advised to sow in the ground in September and October. Cultivated crops can be sown at the beginning of March or during autumn , two weeks before the first frosts. When opting for late planting , cover the buds with 5 cm of soil.

In the case of sowing directly into the ground, if there is a possibility of obtaining seedlings. It is best to choose the second option. Rhubarb planted directly with a seed grows slowly for the first two or three years. While seedling itself is very quick to develop.

The plant is fertilized with manure or compost in autumn, while spring sees the introduction of mineral potassium. Potassium – next to nitrogen – is an important element affecting the correct growth of the plant. Nitrogen fertilization can be applied during maturation. Regardless of the time of year, it is important to systematically weed around rhubarb.

While fertilizing, you can also use urea, which significantly reduces the amount of oxalic acid in the leaves.

Vegetables will most often bloom from the second half of March to the end of May. During this time, flower buds should be removed as their development weakens the plant and slows down the growth of leaf buds. The necessary care treatments also include systematic removal of any weeds. You can limit this task by spreading agro textile under crops. After 8 years of rhubarb cultivation, the plant should be dug, split at the base and removed to another location . Such action will rejuvenate the plant, and this will boost growth.

Rhubarb stems are collected from April to the first half of August and must be broken by hand. Under favorable conditions, they can reach a length of one meter and weigh a kilogram. After harvest, all leaves that are less than 20 cm in length are left to grow. The following season, they will become the base of the new crop. However, plant maturation should be stopped by the end of August at the latest, to give it enough time to prepare for winter. Plants can be protected against extremely low temperatures, covering with saw dust, bark or agro textile. Such a cover is removed when spring returns.

Leaf stems are used instead of sticks, usually in spring when access to them is greatly reduced. In the kitchen, it is widely used in soups, salads, as well as a component for jelly, marmalade and as a decoction to replace vinegar. They are also used as a natural preservative and acidifying ingredient in the processing industry. It can be eaten without any fear. Just sprinkle sugar on stalks while rhubarb lovers recommend to look at old cookbooks. At a time when the plant was more widely available than now.

The price per kilogram of rhubarb varies, while production cost little (full-year crop). With its high frost resistance and straight and easy care, it is the ideal plant for additional production to main crops.

How To Use A Mini Greenhouse

If creating a large greenhouse for you is too exhausting, then start by a mini greenhouse; the steps on how…

Herbal gardens in horticultural tunnels return to grace, and for centuries humans have used herbs not only as spices but mostly as…

Health in your garden

Seasonality of fruits and vegetables has disappeared. Strawberries, peaches or salads have become year-round plants, we can buy them anytime…