Growing scorzoners in a polytunnel 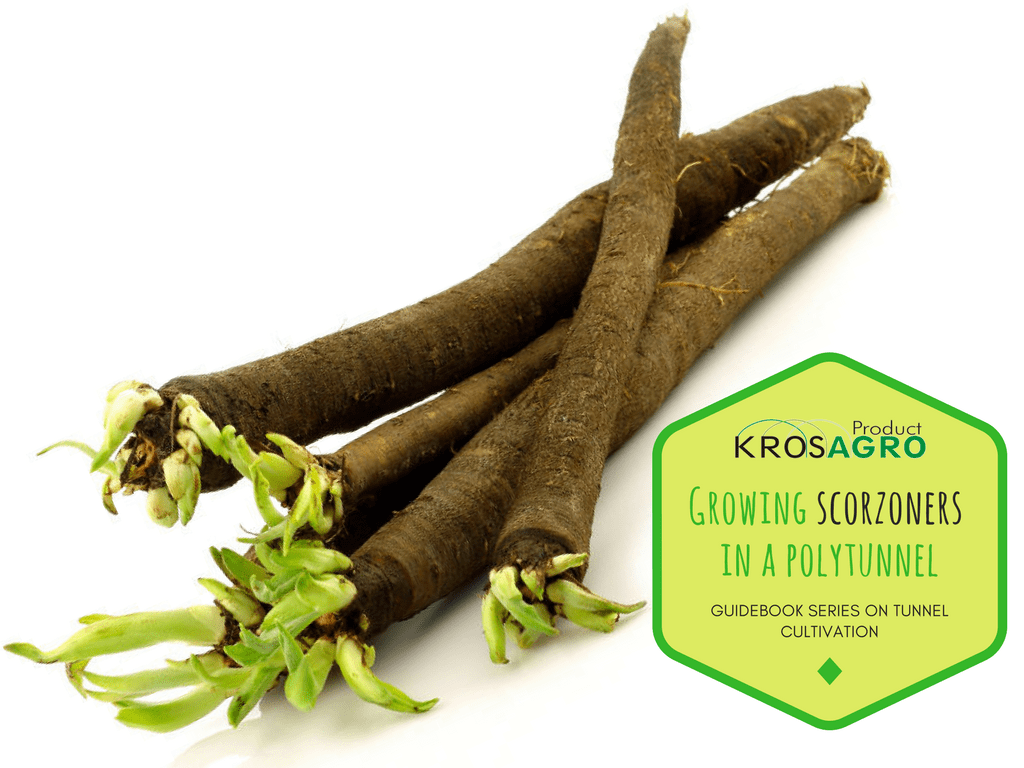 Cultivation of scorzoners in a polytunnel

Skorzonera is regaining its popularity. Long ago, it used to appear on our menu and then unfortunately, the plant fell into oblivion due to a change of eating habits. Quick and junk food has ousted healthy, aromatic and traditional recipes. Lately, skorzonera has been classified as superfood for its health properties. So planting it under cover provides us with a root , tasting similar to asparagus and containing many valuable vitamins and nutrients.

In this chapter of the Krosagro guide on crops under cover, we will show you how to plant, cultivate and harvest it in a greenhouse.

Skorzonera, also known as vipers-grass, belongs to the Asteraceae family. That name refers to the times when it was used as an antidote for venom. The edible part is its root, which can reach up to 30 cm in length. It is a rich source of mineral salts and vitamins C, B1 and B2. Inulin , a valuable ingredient contained in the plant, is a beneficial carbohydrate in the diet of people with diabetes. In addition to these health properties, it is worth making room for this vegetable in the greenhouse. Thanks to the cover, a polytunnel will protect it from pests, the negative influence of the weather and especially acid rains that damage it.

A place for scorzoners cultivation

Suitable fore crops would be onions, legumes and leeks, while scorzoners can harm cruciferous vegetables and other root vegetables.

For the development of the plant, fertile loamy soils with a large amount of organic matter are required. The optimum pH of the soil is from 6.5-7.5. A sunny and warm position for most of the day is required. Acidic, light or very heavy soils with very high humidity are not suitable for their cultivation. The plant will not grow, and even if it does, it will be distorted.

Due to the fact that scorzoners require a relatively even level of humidity during development. It is worth cultivating it under cover, because there is usually a controlled higher humidity rate inside the garden tunnel. Thanks to a greenhouse, you can start growing them much earlier. The high resistance of the plant to the cold combined to the protective plastic cover ensure it can be grown throughout the year.

In European climatic conditions, it is recommended to sow two varieties of scorzonera : Einjährige Riesen and Lange Jan. The first one, coming from Germany, is a fertile variety with medium long roots. It is suited for late autumn and winter use. The second variety of Dutch origin has a tendency to split the roots. It is suitable for preserves and direct consumption.

It is best to sow seeds in April and May. The polytunnel allows for earlier planting, with crops appearing well in advance. If temperatures are normal, you can start growing in March, without fear of frost, thanks to the cold resistance mentioned above.

Seeds of this plant are sown in rows spaced 30-40 cm apart, throwing one every 2-3 cm to a depth of 1-2 cm. After about two weeks, scorzoners should emerge.

The basic treatments during cultivation of scorzoners are the usual loosening of soil, weeding and watering. The soil should be scarified several times if it is heavy and compact. To boost growth, after the development of 3-4 leaves, shoots should be selected to keep the most healthy ones in the row at a distance of 5-8 cm. Skorzonera requires regular irrigation, this will pay off at the end with a higher yield. In the driest period, in July and August, watering will ensure roots are delicate and not chewy.

Harvest and storage of scorzoners

Vegetables sown in spring are good to harvest in autumn. However, taking into account their resistance to cold weather, you can collect scorzoners even in October or November. When cultivating scorzoners under a foil tunnel, you can enjoy fresh goods throughout the winter. The crop should be treated with extreme caution, because damaged roots will lose their taste and quality. After digging, remove the leaves, cutting them about 1 cm above the root. It is best to store them in boxes filled with damp sand at a temperature of about 1 degree.

Today, we will make your greenhouse look more presentable. We will elaborate on how to clean greenhouse glass through two…

Organic crops in a polytunnel

Organic food has become a symbol of a healthy lifestyle. More people are looking for vegetables and fruits that do…

How To Heat A Greenhouse With Solar Panels

If you’re interested to know how to heat a greenhouse with solar panels, it’s very simple; you just have to…