When Can I Begin Growing Marigold Seeds In A Greenhouse? 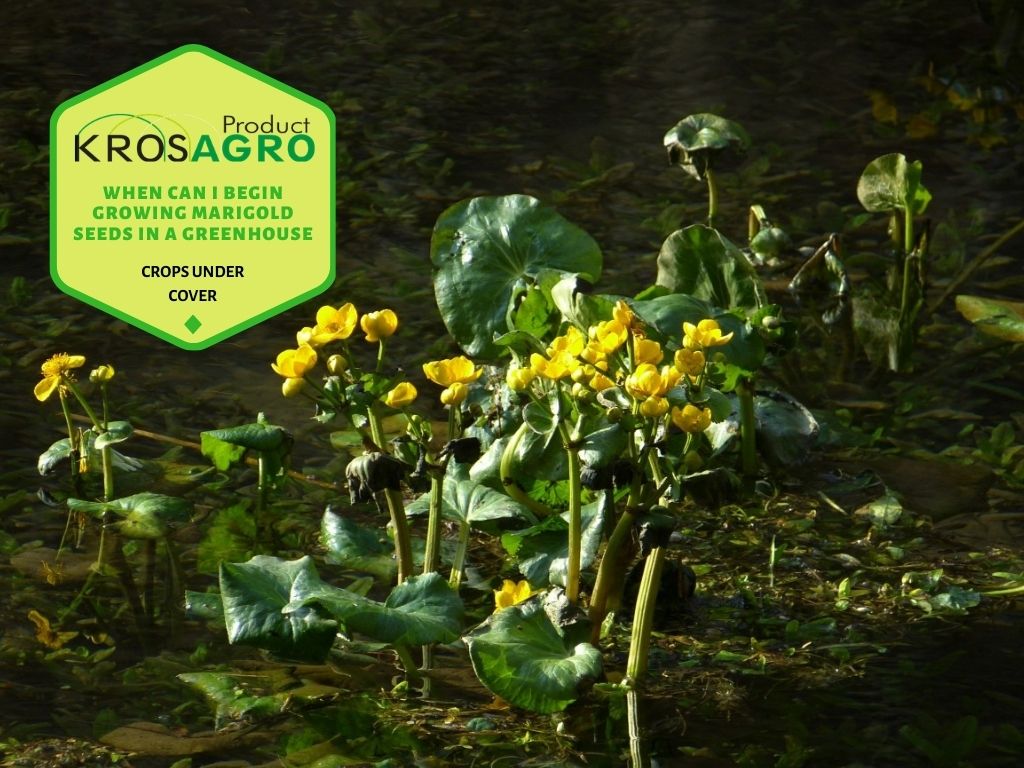 You may ask, “When can I begin growing marigold seeds in a greenhouse?” Well, you have to consider various factors to do so. In a greenhouse, the seeds can be grown around 6 to 8 weeks before the last frost date.

Allowing them to grow in your greenhouse before you will place them outdoors will give you an excellent bloom, for sure. Also, you can expect them to bloom earlier, compared to when you sow them directly in your garden.

There are more things that you should learn about when you can begin growing marigold seeds in a greenhouse. Just read on to find out!

Marigolds have a distinctive pungent fragrance that can tell you the arrival of summer. It includes both hardy perennials and annuals that require minimal care. Generally, its size ranges from 6 inches up to 6 feet tall and bears flowers of different happy colors, including pale yellow, orange, gold, red, and maroon.

These flowers are easily propagated since marigold seeds can readily germinate in warm soil for only a few days. Specifically, the seeds can germinate between 70 and 75 degrees Fahrenheit soil temperatures within four to fourteen days.

When can I begin growing marigold seeds in a greenhouse?

If you want marigolds to brighten your gardens early in summer. You can start growing them indoors, perhaps in a greenhouse. Transplant it outdoors when the danger of frosting passes.

Usually, it will bloom 45 days after sowing, and it will bloom continuously until the next frost. You can begin growing the seeds in a greenhouse 6 to 8 weeks before the average frost date. Allowing them to grow indoors before setting them outdoors will provide them a jump start.

With that being said, you will enjoy their early blooming compared to when you directly sow them in the garden.

Reasons For Growing Marigolds In A Greenhouse

You will know that you need to sow the seeds inside the greenhouse if you live in an area prone to killing frost early in summer or late in the spring. In any case, you can still achieve a bright and happy garden if you start to sow them in a greenhouse a few weeks before the summer comes around.

If you intend to grow Marigolds seeds that belong to the variety that matures slower than others, you might as well want to start to source indoors. An example of this is the T erecta cultivars.

In addition to that, you should also sow them in a greenhouse if you know that you have a short growing season ahead of you. At the start of the warm season, they can be readily transplanted into your garden. And if it is an early maturing variety, it will bloom shortly after transplanting them.

How To Get Started

When the seedlings grow for about two inches tall already. You have to thin out all the plants and separate each cell’s strongest ones. Keep in mind that you have to water it daily using a spray bottle to alleviate damping-off tendencies and prevent the logging of water.

After a week, you need to increase their exposure to the sun and wind gradually for at least an hour a day until they can be left outdoors for the entire day. In such a case, place them in the location where you desire to plant them.

Remember, you should transplant them in a location where it is directly exposed to the sun’s rays.

The soil should also be well-draining. You should do the transplanting in the evening or on a cloudy day so that it won’t need to deal with too much heat as they are acclimating themselves.

Make sure to water them daily for the first week. It is also ideal for giving them a good soak at least once a week after they have been established.

In this section, I would like to share with you some of the best cultivars. All of these belong to the faster-maturing variety of marigolds, precisely, T patula. Without a doubt, you will enjoy its bright and colorful blooms early in the season. Most especially when you decide to begin to sow them in your greenhouse.

The first one is Queen Sophia, which bears enticing and warm fiery petals, so most Americans prefer it. The color of its petals is dark orange, with its edges in yellow color. Typically, its double blooms have a measurement of two up to three inches.

It will mature for about 60 days, growing into a height between 10 and 12 inches. Queen Sophia usually spreads for about eight inches.

The shades of marigolds are typically limited to orange, yellow, and red. But this cultivar can bear gorgeous pink-colored flowers. At first, the flowers have a reddish shade, but eventually, it will transform into a pinkish-yellow hue.

Like the previous cultivar. It usually reaches up to 10 inches tall at maturity and a spread ranging from 6 to 8 inches. It will utterly mature in a span of 55 up to 70 days.

Now marigold lovers can make their garden more enticing with colorful flowers early in the season by growing them inside the greenhouse and then later on transferring them outdoors.

This has become a habit to most of them – seeding it indoors and transplanting it outdoors after the frost. They do it almost annually to enjoy a gorgeous and colorful summer.

If you start this season, you will most likely do it next season as well. When can I begin growing marigold seeds in a greenhouse? Do the process mentioned above and surely, you will enjoy!

Wood ashes as fertilizer for cultivation under cover

Wood ashes as fertilizer for cultivation under cover is a very valuable gardening material. It is easy to obtain, it…

Thanks to a polytunnel that enables the cultivation of plants that would not normally not be possible, you can grow…

What and how to grow in a polytunnel?

Many gardeners think that because of a limited space in the polytunnel, the amount of plants will always be the…