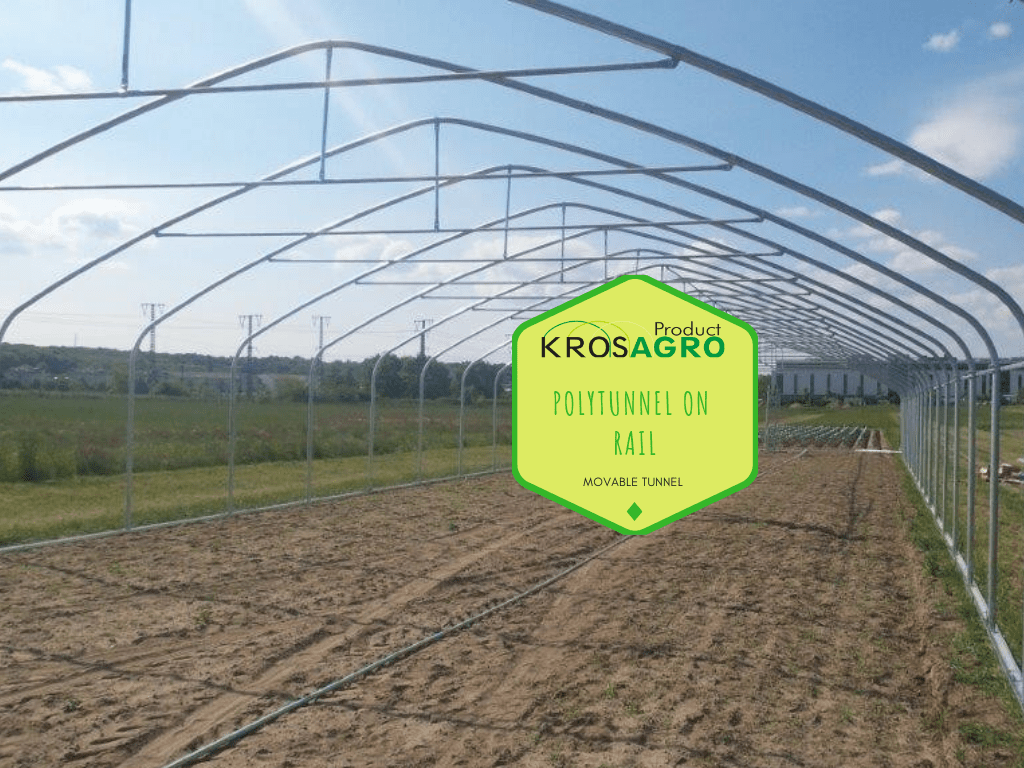 A movable polytunnel is a term for a greenhouse which has been designed in such a way that it can be moved on rails. This allows you to locate the structure where plant cover is needed and to roll it to the next location at any time. This model on rail has wheels. On both ends of the tunnel, a plow is installed, so that the structure does not sink in the soil while moving it forward or backward.

In order for this modern foil tunnel to work optimally in relation with cultivation under cover, it must be adequately located. Without proper planning and without taking into account the specificity of the area, cultivation in such a facility can become a burden for the grower, instead of being easy, comfortable and profitable . We will tell you how to guarantee success of your crops in the following article. We will review how to ensure best conditions for growth and optimize such a construction.

How to use a movable greenhouse?

For cultivation under cover in a movable polytunnel to be profitable, growers should think not in terms of seasons but in the long term. The project should take into account plants’ needs, soil fertilization, crop rotations, their optimal harvesting time, climate, temperature, etc. Based on this, it is easier to design how to move it, when and for which plants. With knowledge of changing seasons, plant requirements, temperature variations, one can fully support fruit and vegetables. This leads to mature and abundant harvests.

A professional polytunnel on rails consists of a standard structure, reinforced with top and side brackets, and equipped with a rail at the base to roll it in and out. Just like other structures produced by Krosagro, they are made of hot-dip galvanized steel. Hot dip galvanization protects all elements from corrosion, resulting from constant temperature changes, different humidity levels, watering, and atmospheric conditions. Zinc treatment guarantees that the construction can be used for years. The modular steel structure offers the investor the opportunity to expand the building with further segments. Compared to a stationary greenhouse, these models are fitted with wheels to facilitate rolling. Thanks to this, the cultivation space under protection increases manyfold.

The movable foil tunnel is pulled, securing towing ropes between structure and tractor or vehicle. In order for the operation to run smoothly, the area should be well prepared before assembling the greenhouse. It should be leveled, and hardened where the rails are fitted, with a slight slope so water does not accumulate. It should be directed towards the sun to benefit from the heat for as long as possible. The assembly of the structure is not difficult, customers usually decide to carry it out on their own. It is a considerable saving, because hiring a qualified team represents a considerable cost.

The rollable polytunnel comes at a higher price per square meter than a standard professional greenhouse. This design involves the preparation of a track system. Although the cost is higher, the benefits of this construction are visible after the first season. Cultivation under cover allow plants to grow much longer and also faster. With field cultivation, growers are dependent on external factors, weather conditions and many other hazards. The foil tunnel enables the producer to determine the environment inside the greenhouse. By creating the optimal microclimate for plants, the outcome is a much better return and high quality harvest.

Soil for cultivation under cover

The choice of a greenhouse is usually associated with the grower’s decision to grow plants throughout the year. This can be achieved by using a variety of supporting devices, such as stoves, fans, sprinklers, heating , etc. In the case of stationary tunnels, intensive cultivation in one place can be associated with soil fatigue. Such a situation arises after a few seasons, rather sooner or later. The result is a substrate full of pathogens, with low humus content, weak and not suitable for plants.

Planting in a mobile greenhouse

When planning crops, it is very important to take into account the height of the plants. You must minimize the risk of damage with the tunnel walls while moving it. Tall plants should be grown in the center, the lower ones should be kept on the outside. However, if this is not possible, as in the case of covered orchards, it will be important to prune shrubs and fruit trees properly. During installation of the structure, remove any obstacles in the perimeter.

When choosing a movable tunnel, check the structure’s resistance parameters. Over the years, the structure will be tested by various forces: wind, rain, hail, snow loads, etc. It is important for the producer to become familiar with the components of the greenhouse. Many manufacturers offer additional reinforcements in the form of bars, side and roof reinforcements, which further stabilize the greenhouse.

Developing a production with a tunnel on rail is not comparable to a traditional fixed greenhouse. The grower can expect many challenges, but also the benefits from this type of cultivation under cover. Krosagro support producers in the process, advising and offering them the best solutions. People interested in this type of construction are encouraged to contact customer service.

How To Grow Tomatoes In A Greenhouse

If you want a sweeter, healthier, and juicer tomatoes, you have to know how to grow tomatoes in a greenhouse;…

Cultivation of cucamelon in a polytunnel

This interesting fruit comes from Mexico. It catches the eye with its appearance, and its name triggers your curiosity. Mouse…

A polytunnel is a construction which optimizes production and provides larger yields. Although many documents, studies and offers present greenhouses…