How to prevent rust in a car? 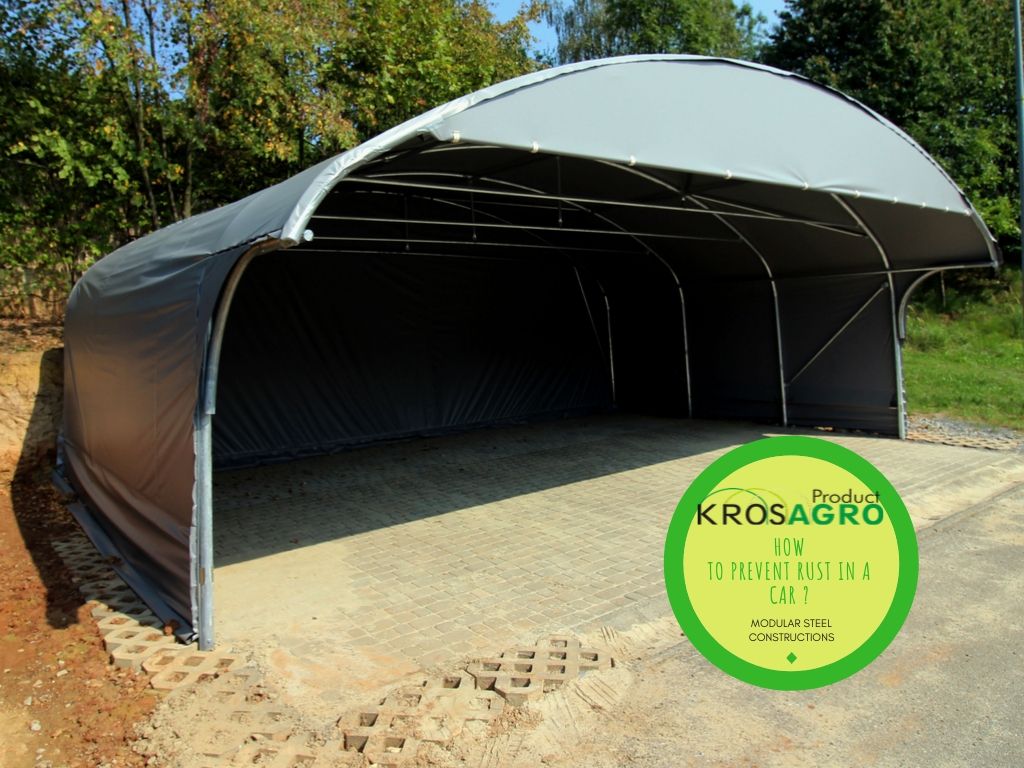 How to prevent car rust? Every owner faces such a challenge. To enjoy your vehicle on a long term basis and in addition to cyclical visits to the mechanic, it is necessary to protect it from the weather. Rust will appear sooner or later, however, by reacting early enough and implementing maintenance duties, the aging process of steel can be slowed down. Your motor will therefore retain its appearance, as well as remain operational for years. A garage tent represents an inexpensive but solid weather protection.

How to prevent car rust? How to protect a car?

Rust is the result of an oxidation process. It occurs when metal reacts with the atmosphere. Corrosion can be divided into two types. The first one called electro chemical requires electrolyte to happen, meaning water. Contact with a structure oxidizes iron compounds, also leading to rust formation in the long run. The second type is caused by chemical compounds such as oxygen, carbon dioxide, etc. Dirt and moisture dramatically accelerate the spread of rust. To counteract the phenomenon, one should be pro active to make sure it does not spread further. If not, this usually ends up with the necessity to replace the whole element. Therefore, you should act immediately, even with the smallest spots. You can read more about this topic in the article “How to prepare a car for winter in a garage tent?“.

Where do corrosion appear?

There are many elements exposed to corrosion. They can vary depending on a specific model, design and brand. When checking the overall condition of your vehicle, you should first of all focus on wheels, lower part of the doors, steel thresholds, front bonnet and boot. It may also appear under protective strips, in places where moisture remains for long period. Visible from the outside, it will make even the best car look terrible. Do not postpone washing and waxing regularly. After all, dust and dirt are one of the reasons for the appearance of corrosion. It is also necessary to eliminate any chips in the varnish that appear on bumps. Each scratch must be repainted as soon as possible, adding a further coat of varnish. If you neglect these, you will have to visit to the car-body repairer sooner or later.

Not only for the car but for the driver as well. The poor appearance of a vehicle is one thing, but if the rust spreads to parts affecting driving, it becomes dangerous. Rust also appears on brake discs, however, it rubs off while driving, unless the car has not been used for a long time. While handles and doors just need to be rejuvenated or replaced, a corroded exhaust system will simply become unbearably loud. The problem begins when rust reaches components. Extensive corrosion can also lead to chassis damage. Although repairs are possible, they are often inappropriate due to very high costs involved. Usually a vehicle whose load-bearing elements are badly affected is destined to the scrap.

Car parking in a modular structure

Garage tent are modular steel structure made of pipes and profiles. After assembling parts together thanks to bolts and clamps, this functional structure is ready for use. At manufacturing stage, an anti-corrosive layer is applied. Throughout the year, tents will be repeatedly exposed to weather hazards, humidity and changing temperatures. Zinc adheres to the elements, protecting against rust. A tarpaulin is fixed onto the frame with mounting straps. This set up protects tools and machines stored inside.

Growing Chicory In A Polytunnel

Chicory is a leafy vegetable very similar to lettuce, with rather more nutrients. One of the advantages of chicory is its resistance…

How to maintain a motorcycle in summer?

How to maintain a motorcycle in summer? As sunny conditions announce the arrival of summer, the atmosphere warms up significantly….

Construction Of A Polytunnel

In this Krosagro guide on foil tunnels, we will talk about elements, parts and accessories needed in the construction of a polytunnel. What does a…