How to grow chrysanthemum in a polytunnel? 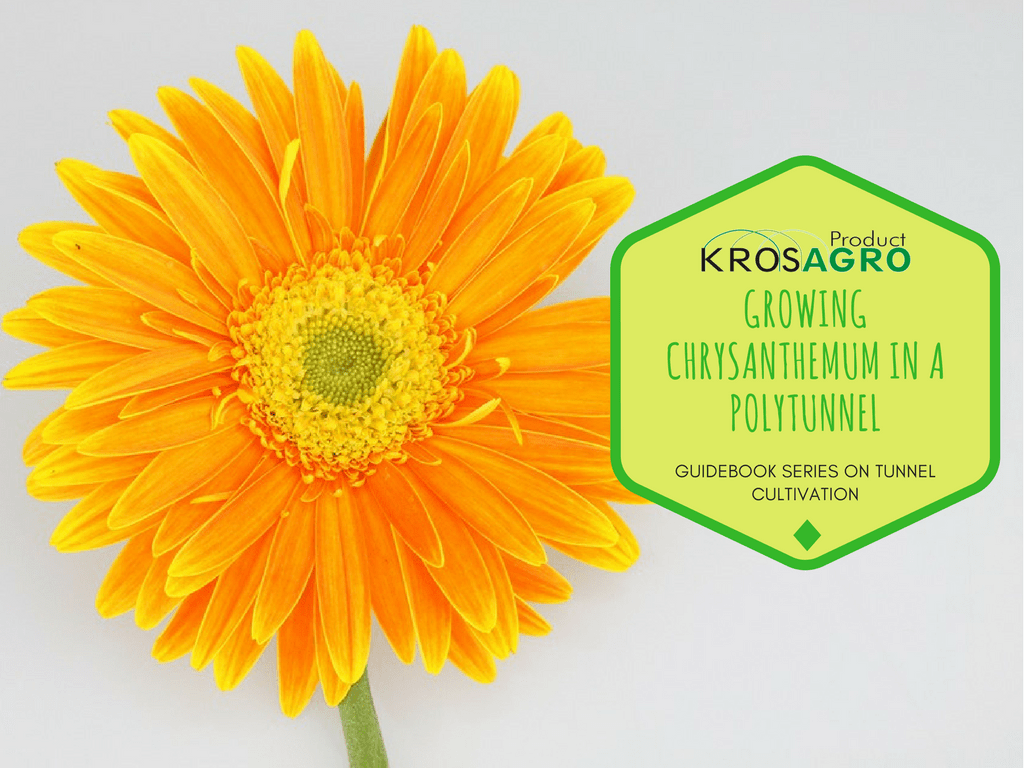 Chrysanthemums are popular flowers because they bloom from autumn to early frosts. In addition to this long flowering period, they are characterized by a wide palette of colors and shapes. Diversity and strength make them suitable for plantation in flower beds. Many potted chrysanthemums are grown under shelter. The cuts are used when creating bouquets and decorating a house. A professional polytunnel is fully suited to wide scale chrysanthemum production, while in a hobby foil greenhouse, growing them in raised beds mean you will enjoy them much longer.

In the next section of this guide, we will describe step by step how to cultivate chrysanthemum.

Why should you plant chrysanthemums?

Chrysanthemums can be grown in any convenient place (as part of flower beds, pots on the terrace, and even a balcony). The fact that they bloom quite late led them to being used as decoration in cemeteries. The symbol of mourning and death is linked to chrysanthemums. However, for some time, there has been a change in their perception. Chrysanthemum really symbolizes love, passion, long life and happiness. They appear in many texts from Asia, where they are compared to the sun. Flowers can be seen not only on tombstones, but also as multicolored decorations in homes. Intense and bright colors tend to create more positive impressions than nostalgic memories.
Chrysanthemum, belonging to the chrysanthemum family, is an edible flower. Many renowned restaurants use it to enrich the taste of many dishes. The young shoots of the plant have a huge content of vitamins, provitamins and health-promoting properties.

What are the chrysanthemums?

In this regard, we have a wide selection of varieties, shapes and colors to choose from. It is also the case with height, leaf shape or inflorescence. We distinguish chrysanthemums with a single inflorescence, full, spherical, parasol or needle-shaped and many others. New crosses are also being created.
In addition to aesthetic values, it is worth to grow them, because chrysanthemums can also be classified as perennial or seasonal, blooming in spring or autumn, intended for a vase (cut) or potted. If we already have a stand or a spot in a polytunnel, the size of the plant will be of importance: how tall does it grow, how wide does it spread and how much space will it occupy?

How to grow chrysanthemum?

Chrysanthemum is a plant that needs fertile, humus and nutrient-rich soil for proper development. Heavy soils can lead to freezing of the flower. The optimum pH should be between 6 and 6.5. With such soil conditions, nutrients are much better absorbed. This plant needs quite a lot of them, so for the flowers to look even more attractive, fertilize them twice a month.
After 4 years of chrysanthemum cultivation, they should be trimmed or soil should be replaced on site. Otherwise we may expose the crop to injury, due to the growing pathogens. Weakened plants will be more vulnerable to diseases and pests.

Chrysanthemum seeds are usually planted from April to the end of June. The seed is placed in one pot in the middle of the container, deeply sinking it into the soil. Growers also use a method in which the pot is filled at ¾. The budding plant is developing inside the walls of the pot. Of course, this is an effective and more economical method of cultivation if the flowers are to be sold.
Two weeks after introducing the flower into the garden or under cover. Comes the time to trim the tops of the shoots. This treatment leads to a more harmonious spread.

How to reproduce chrysanthemums?

At the beginning of spring, end of March, the cuttings are picked from the tops of the chrysanthemum. The shoots from the root are cut with a sharp knife at a distance of 6 to 8 cm from the base of the root. It is important that they retain 3 to 6 leaves.
Then seedlings are sawn into pots made up of 60% peat and 40% sand. Maintain moisture to avoid wilting of the plant .
Preferably, the temperature is to stay at the same level until the chrysanthemum is put in its permanent place , and 15 ° is enough. Chrysanthemum propagation is usually carried out in  polytunnels or seedling tables. In greenhouses, it is much easier, as it keeps the temperature constant.

Keep them longer in a garden tunnel

After a maximum of three weeks, the seedlings should be fully developed. Before putting them into larger pots, they should be hardened. Ventilation comes handy for this. Polytunnels with lateral ventilation allow effective lowering of the temperature. With a crank, the cover on both sides is lifted, and air circulation allows to adjust the temperature to grower’s requirements.
After about 60 days, everything is almost ready. The plants are cut after the 5th leaf. This enables much better and quicker blooming. At the end of spring (much earlier under cover) plants are in their permanent spot.
If chrysanthemums are to develop in the open, wait until the last frost. It’s much better to keep them longer in a garden tunnel than to expose them to frost damage.

How to go through winter with chrysanthemum?

Some varieties can overwinter on site, for those which are less frost resistant, it is enough to use a mini foil tunnel. However, if we do not have any cover, we need to cut the shoots 15 cm above the ground line . Leaving the plant in frost and snow leads to its decay.
It is important to remember to ventilate chrysanthemums in foil tunnels occasionally, so that they do not retain too much humidity inside, as they do not tolerate such conditions. You can also spread spruce branches around them, which give provide protection against the cold.
If the substrate in the garden is damp and this condition also persists in the cooler months, it is much better to dig the roots out and transfer the plant to an unheated greenhouse. Chrysanthemums growing in pots should also be protected,  in order to grow them the following year.

Which size to choose for a garden greenhouse?

After having read the entire guide “Polytunnel from A to Z”, you can focus on the choice of a structure….

Cultivation under cover in a polytunnel

Growing under cover in a polytunnel is a much more effective solution than planting vegetables or fruits in the open….

Are you in love with someone right now? Are you having a hard time confessing? Well, you’re in luck because…